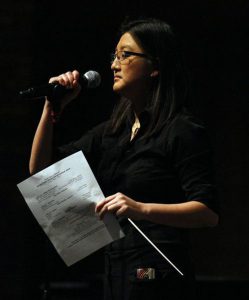 Brianna Bjerke comes to Ravenwood after successfully establishing her career as an educator, conductor, and music arranger over the last eleven years.  Most recently,  Brianna served as the conductor and primary music arranger for Sistema Ravinia, an outreach education program through Ravinia Festival that serves over 200 students in the Chicago area.  Through Sistema Ravinia, she focused on bringing culturally relevant curriculum to under-resourced communities while fostering social change alongside a high level intensive music education program.  Brianna’s arrangements have been conducted by German Conductor Ben Gernon, Columbian Conductor Lina Gonzalez Granados, and Chicago Civic Orchestra Conductor, Erina Yashima.

Prior to teaching in Chicago, Ms. Bjerke was the Director of Bands and Orchestra at Mt. Zion High School (2008-2016) where she grew the music program into a leading marching and concert band program in the central Illinois area.  Throughout her teaching career, she has served as a clinician, judge and music arranger for area marching bands, guest music festival conductor, and IHSA Solo Ensemble and IESA Organizational Contest judge.  Additionally, she served as the Assistant Conductor of the Decatur Youth Symphony and District 5 Orchestra Representative for the Illinois Music Education Association.

Brianna grew up in Onalaska, Wisconsin, so she loves the outdoors and the Packers!  She graduated from Millikin University (2007) where she studied music education and conducting.  Brianna is looking forward to getting to know Nashville and the Ravenwood community!