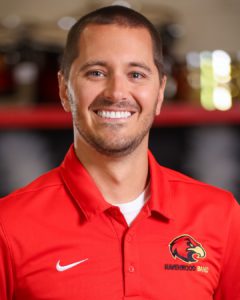 Chris Janowiak is in his fourteenth year of teaching and his fifth as Director of Bands at Ravenwood High School, part of the Williamson County School District in Brentwood, Tennessee.

In just a short time at Ravenwood, the band program there has already seen significant growth.  After starting with only one functioning concert ensemble in 2018, the program now comprises over 200 students and features four independent concert ensembles.  The program also consists of the competitive marching band, winter percussion group, along with JV and varsity winter guards. The marching band nearly tripled in size in just three years, has consistently won regional competitions, and has performed alongside of country music superstar, Thomas Rhett, at the Country Music Association Awards live television broadcast in Nashville, TN.

Prior to his arrival at Ravenwood, Janowiak served as the Director of Bands at Antioch High School in Nashville, Tennessee.  In just one year at Antioch, Mr. Janowiak grew the band program by nearly 65%.  By the end of his tenure, the band had more than doubled in size making it the largest band program in Metro Nashville.   While at Antioch, the school’s top concert band, the Wind Ensemble, earned special honors as they were awarded the “Award of Distinction in Concert Performance” by the American School Band Director’s Association.  Awarded to bands that achieve a perfect score both on stage and in sight reading, the Antioch Wind Ensemble earned the award twice under Janowiak’s baton (2016, 2018).  Chris previously served in a similar role at Mattawan Consolidated Schools in Mattawan, Michigan.   Under the direction of Mr. Janowiak and colleagues, Mr. Bill Boswell and Mr. Josh Garcia, the Mattawan Bands continued their tradition of excellence as one of the most decorated band programs in the state of Michigan in both the marching and concert idioms.

Chris is an active performing keyboardist and vocalist with various pop and country artists in Nashville.  Chris and his wife, Lindsay, live in Nashville with their french bulldog, Yoda.