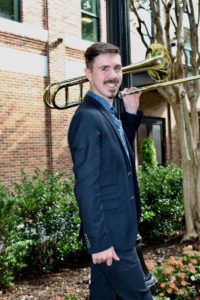 Nathan Mohnke is a local trombonist and educator in the Nashville/Franklin area. He is a graduate of Belmont University where he received his Bachelor of Music in Music Education and Trombone Performance. While at Belmont, he performed in the wind ensemble, orchestra, and top jazz band and had the opportunity to perform with renowned artists such as Cece Winans and Michael W Smith. He also has been involved in the marching arts and marched lead baritone with Music City Drum and Bugle Corps in 2017. In the summer of 2019 he marched euphonium and bass trombone with the Bluecoats Drum and Bugle Corps, a season where they earned the silver medal at DCI finals. Currently, Nathan teaches Music Theory at Nashville School of the Arts and teaches his private brass studio at Shuff’s Music Store in Franklin. Students in his studio have gone on to earn placements in both mid-state and all-state bands. He also performs regularly as a member of Bone Therapy, a local trombone ensemble, and as a founding member of the Lakes Brass Quintet. He is excited to be working with Ravenwood to help them get ready for a great season.